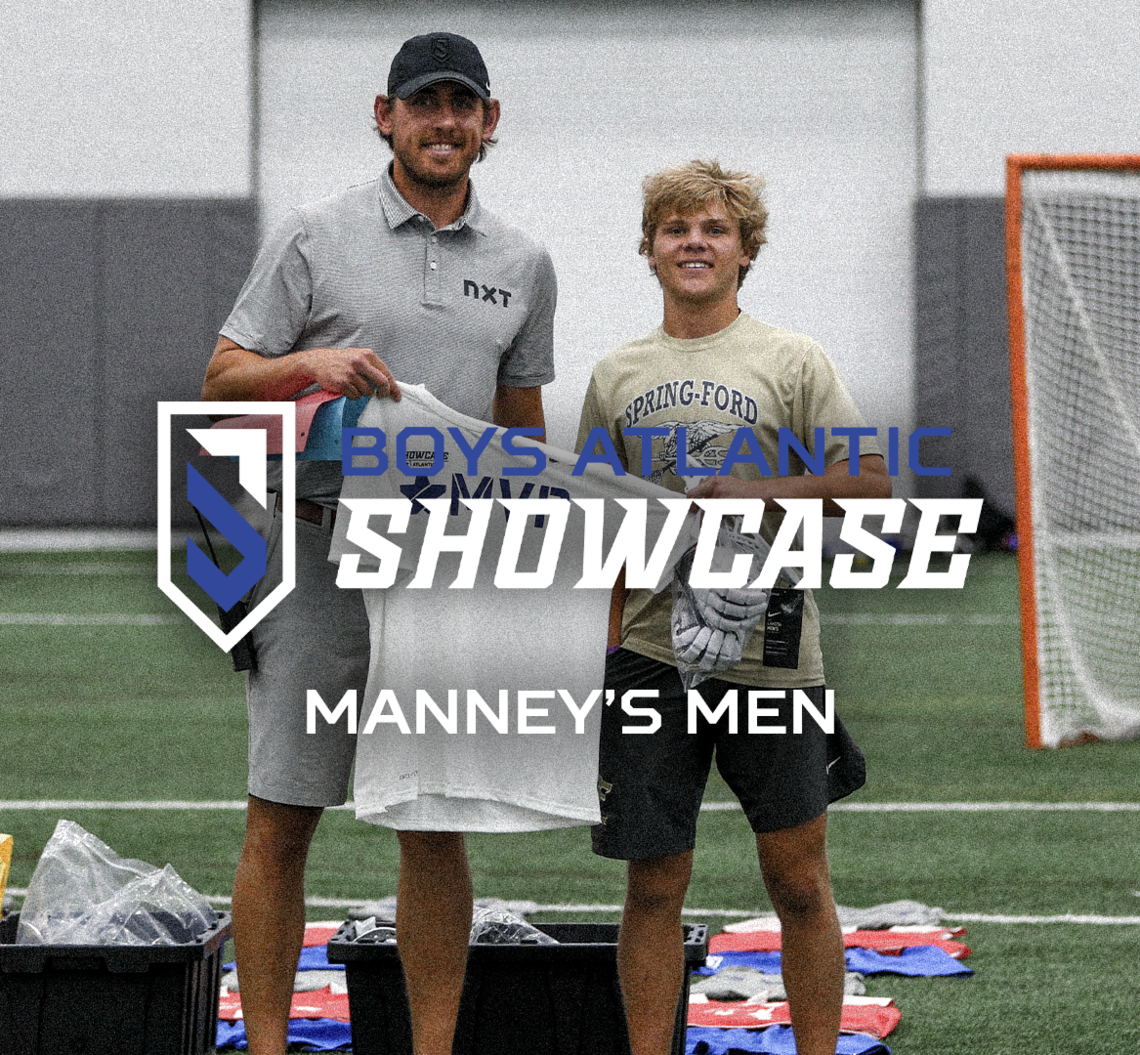 Brett Manney has made his 2022 Mid-Atlantic Showcase Manney's Men selections.  Top-tier talent could be seen from 20 different states, from California to New Jersey, Minnesota to Florida, and everywhere in between. These are players that stood out above the rest throughout the day.

Coaches from Princeton, Rutgers, UNC, St. Joe's, Villanova, Towson, and more were in attendance to catch the action.

Brett Manney, is a 15-year professional lacrosse player, captain of the Albany FireWolves, and two-time captain for the USA National Indoor team. Brett also serves as the VP of Recruiting at NXT. He won two bronze medals with the USA National Indoor Team. He played on Delaware's 2007 Final Four team, captained the 2008 team, made the North-South All-Star Game, and is the driving force behind Showcase Lacrosse's nationally-known events. Manney sees players from all over the country at NXT events.

I have always been a fan of the newly minted High Point commit. A former Manney’s Men selection, the Spring-Ford attackman backs up his flashy gold chrome helmet with an electrifying first step, heads-up vision, and provides his team with a spark every time he has the ball. Wixted is so elusive behind the net of getting to his right hand, drawing a slide, and finding open teammates for easy off-ball cutting goals. His game has grown throughout the year from a scorer and now a playmaker who racks up points in bunches. Do not be fooled by his size as he plays tough and was attacking any defenseman who lined up against him all day.

Last year’s MVP was the best midfielder at the event once again. If there is one consistent with Lamatrice, it is that he has a knack for making our All-Star games. In a span of just a few minutes, I saw him run down the alley and pick out a corner drawing some love from his teammates. Shortly thereafter, he found space off the ball to unleash a textbook high-to-low finish. You would not have known he is coming off of a wrist injury through his hand play and velocity on his shot. With improved passing and more dominance on the defensive side of the ball, Lamatrice has the ability to be one of the best middies to come out of the Midwest for the 2024 class.

College coaches love players who are smart, compete, and are tough. Gibson is it all as he also boasts a 4.0 GPA. St. Augustine had its best season ever advancing all the way to the championship game of the Tournament of Champions in New Jersey and Gibson was a big reason why. Yet at the Showcase when he lined up on the face-off wing, he got the groundball. If he was covering a middie he guarded them to the parking lot. If he got the ball in a clear, he was automatic and comfortable as a short stick bringing it into the offensive zone. There were some defensive studs at the showcase but Gibson’s overall smooth play and his compete level was off the charts. I cannot imagine him being uncommitted at the end of the summer.

I was impressed with Beller after seeing him compete in our Nike Boys Philly Showcase this past fall and he continued to make noise at the Atlantic Showcase. Beller has a wider stance than most goalies but his balance and poise allows him to do more than cover a majority of the net. One thing is for certain is that he communicates with his defense, and I am sure nearby residents of Wilmington could hear the North Jersey product from the Showcase.

A lot of the time the big name lacrosse blue blood high school goalies in Jersey get a ton of credit but do not sleep on Beller’s game, he is a gamer. Not only does he have a knack for being great at getting to the ground and making saves but if no one is open on a clear he is like having an extra midfielder with the ball in his stick, so comfortable out of the cage. Any coaches still in need of a goalie need to get their folding chair to the sideline to watch this kid play.

One of the youngest guys at the event. Aj Yeung is a scrappy, smaller, do it all face-off guy. He can stay on, and play both defense and offense. He was particularly strong on the defensive end. He had a great, quick D exit that he used all day long. He was a magnet toward every loose GB. Until he battled Corey White, he was facing off at about a 70% clip. I would love to see AJ continue to develop his exits. I believe with a little bit more time spent in the weight room, developing his frame, AJ could be a threat to be reckoned with.

White stole the show at the face-off X today. In both battles against Yeung, he was facing off at over a 70% clip. Utilizing extremely fast hands, he was able to get the party started for his offense every single time. He was confident on his exits, was phenomenal in transition, and was able to score a few goals and a few assists. Using an array of exits, he was able to keep his opponents on their toes, making it very tough for his opponents to stop him. I would love to see Corey continue to develop his play outside of the face-off and clean up his play in between the lines. If Corey continues to develop his frame and size, he will be a major threat at the next level.