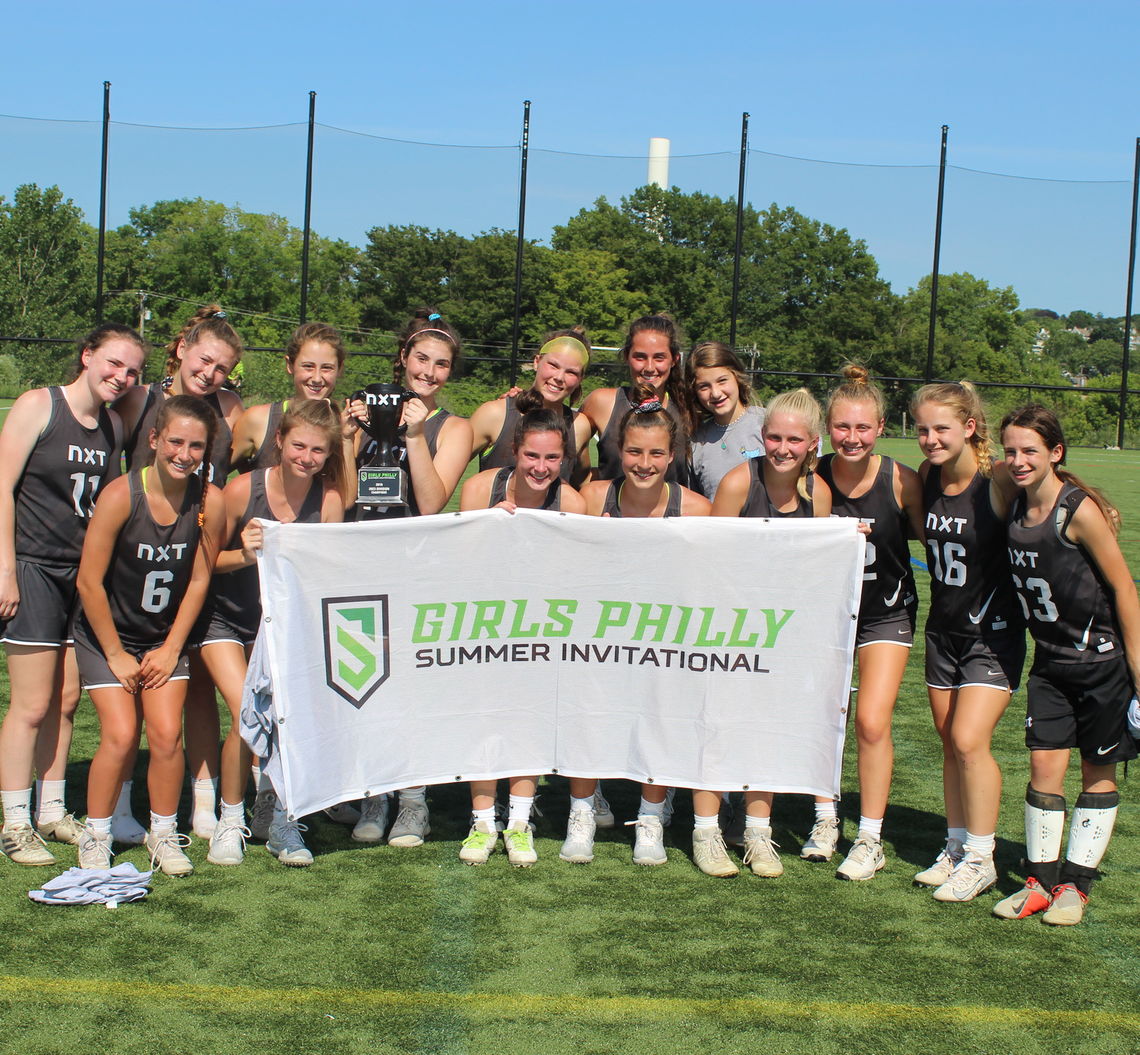 In Greek mythology, they say the Trident was the weapon of choice for Poseidon, who used his spear to “shake the earth” and cause some “mighty earthquakes”.  The  NXT Girls lacrosse club teams were invited to compete in the hopes to create their own earthquakes alongside talented teams at the Trident for grad years 2024-2028, and the Girls Philly Summer Invitational in conjunction with Girls Philly Summer Showcase for high school teams in grad years 2023-2020! Let's just say, Poseidon would have been quite proud of the club after the impressive showing this weekend.

QUICK RECAP:
Girls Philly Summer Invitational:  NXT HS Divisions SWEPT their respective brackets!
Champions: 2020, 2021, 2022, 2023 Black
NXT 2020, 2021, 2022 & 2023 squads all faced a challenging slate at the Girls Philly Summer Invitational Tournament at The Proving Grounds. Each team’s schedules were filled with some familiar foes and some first-time opponents!  Each team had some impressive games throughout the day and saved their best performance for their final games!

The Trident: NXT played in 3 Championship games at the Trident, coming away with one trophy!
Champions: 2026
Runner Up: 2025, 2027
NXT 2024, 2025, 2026, 2027 & 2028 teams squared off at the Trident Tournament at Plymouth Whitemarsh HS, or at The Proving Ground site.  The teams battled hard throughout the day and showed tremendous resiliency as they narrowed the gap between themselves and some familiar rivalaries!

NXT 2020 was clicking on all cylinders and had themselves a day as they got into a groove right away!  Goal celebrations were epic, the juices were flowing, and high fives were contagious wherever they went!  NXT faced a talented, DI heavy commit team from West Coast Starz who nearly pulled out the upset in round 1!  But our most experienced crew got themselves refocused for the final and pulled out an impressive win with a complete team effort!

NXT 2021 had some ups and some downs but saved their best performance for their last 2 games of the weekend.  As the squad looked to have an uphill battle in front of them entering round 1 of playoffs, they pulled off the upset against Diamonds who narrowly beat them the day before. After pulling off the 1 goal win in round 1, it looked like David would once again have to face Goliath, as a rematch vs. West Coast Starz was looming. Just hours before, the 2021 squad was handled by the Starz, and the talented Cali team seemed to be on their way to holding bragging rights. But then, as if before our very eyes, this 2021 squad matured and played their most disciplined and calculated game of the season.  It was a chess match from start to finish, until Katie Bergen and goalie, Chloe Herghelegiu, called “Checkmate” as they heard the final horn blow!

NXT 2022 are having themselves a season! In just the first month of play this team has gobbled up 2 championship trophies and is playing with a swagger like never before!  After coming off an incredibly hard weekend at Live, Love, Lax, this crew bounced back with a vengeance and dominated their opponents….that is until their final game of the day. Down 6-2 at halftime, it appeared as if this championship run would pass them by. But as they clawed their way back goal after goal, their spirits began to rise! In sudden death overtime, Diamonds won the ensuing draw and looked to have a path to the goal, but Lexi Hobson broke up the play & fought through the crowd to come up with a key ground ball, eventually leading to an 8m for sharpshooter, Ava Kane.  SHE BURIED it and the rest, as they say, is history!

NXT 2023 Black was a force to be reckoned with as they took down one opponent after the other in this year’s Invitational.  Goalie Sammy Cifra has been playing some of her best lacrosse of the season and helped to lead her team to their final Championship matchup vs. Outlaws Ladies. The Syracuse area team was nearly evenly matched and in no surprise proved to be a very physical battle from start to finish. This squad dug deep and in true NXT '23 Black fashion relied on a total team effort to secure the narrow 9-7 victory to win the ship!

NXT 2023 Volt saved their best game for last, completely dismantling PA Express’s top team at the Invitational, in a 14-1 route.  Wow, was this team impressive in their final game of the weekend.  Goals were flowing, passes were threaded, and the transition was flawless.  The defense completely shut down PA Express attackers and the “Crash Call” under the direction of Sophie Cappello was epic!

NXT 2024 to say this team is showing improvement this summer is an understatement! They are beginning to grow as a team and working on perfecting their new plays as an offensive unit. This past weekend, the squad had the opportunity to have some blowout victories that allowed many players to test some new positions!  In round 1, the 24s faced a physical Team 91 squad, who narrowly earned the 9-7 victory.

NXT 2025 had a very strong weekend of play but came up just short of their Championship hopes vs. T3. Their transition game was back in full effect, and they were connecting on goal after goal!  The defense was working on implementing their crash calls and the communication from defender Phoebe Ridder was amazing!  Despite the efforts and comeback from Goalie, Kit Kat, the team fell just a little short of sealing the deal.

NXT 2026 was doing “waterfall” after “waterfall” cheers on the sidelines as the goals came pouring in. This squad had their eyes on the prize from the opening draw of the tournament, they were untouchable as they never looked back.  Avery Massey led her team in their Hype new cheers which helped them keep their foot on the gas. The Jayo twins, Kaiane and Maite, were amazing in the midfield and defense end, helping to lead their team to victory!

NXT 2027 did someone say CHAMPIONSHIP GAME!  What a weekend for the '27 team as they showed how hard they have been working at practice these past few weeks! In round one of playoffs, the squad narrowly defeated HHH to move onto the championship game vs. familiar foe Pa Express! In a consistent battle all year, and including this weekend, PA Express has been getting the better of us as they handled the 27s the day before. But this crew was not deterred and nearly took down the top team. With no time left on the game clock, PA Express was awarded an 8m and converted to break the tie and edge the 2027s by a goal in what was a rematch for the ages!

NXT 2028 came, won, and made playoffs!  All those games against the big girls are paying off for the 2028 team as they finished in 4th place in the 2027 bracket to qualify for their first-ever playoffs!  As the 4th place finisher, NXT faced the top team and eventual champion, PA Express. The 2028 team learned a lot of lessons throughout the weekend and they are quickly working on implementing all their new concepts learned each week at practices.

COMING UP
Catch the 2021 - 2023 Black and 2023 Volt teams at Top Flight July 5th - 7th. Follow the NXT LC Girls account for behind the scenes footage of their quest for the chips.