Mother Nature cooperated and delivered some beautiful weather to compliment a great kick-off event at the NXT All-American Tournament! NXT faced a lot of tough battles throughout the weekend, with tremendous highs, as well as some valuable learning opportunities learned through a loss. 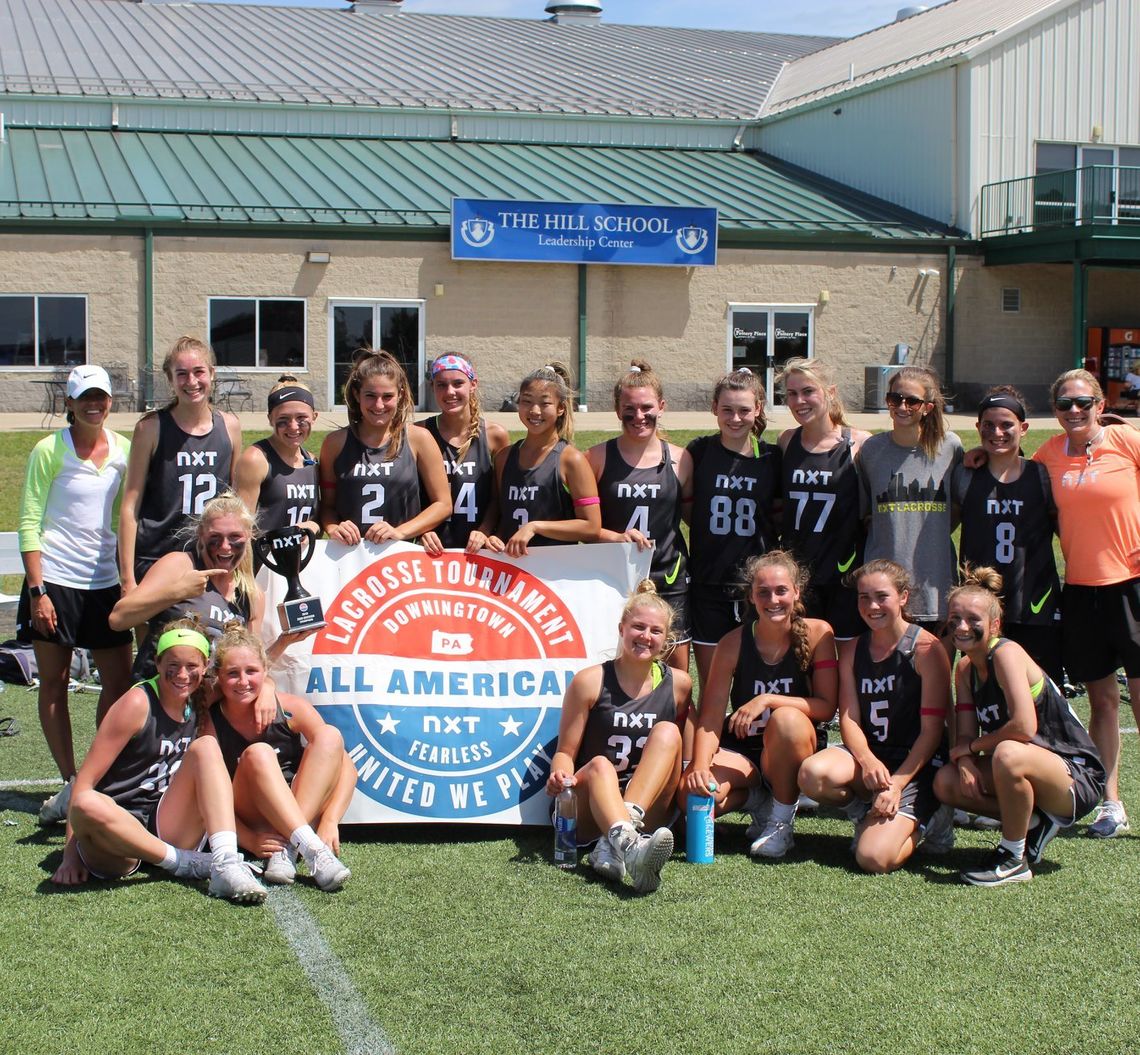 The NXT Girls Lacrosse Club kicked off an eventful first weekend of the summer season at the All-American at United Sports in Downingtown, PA. Every NXT team participated from the HS 2020s to the youth 2027/28 teams in the two-day event.

NXT teams faced off against strong competition including Heros Lax, HoCo, T3, Belles, Steps and more. NXT endured tough battles throughout the weekend, with tremendous highs, as well as some valuable learning opportunities learned through a loss.  All of NXT teams were given the chance to work out the kinks, provide a further focus for their teams’ summer practices, and to get even more excited for the many events that lie ahead of us this summer.

Three NXT teams earned their bracket championship including the 2020s, 2022s, and 2023 Black with many others competing in the semifinals coming up just short in the end.

NXT 2020 faced formidable Steps 2020 & 2021 teams and NXT came up on the winning side against both of their talented teams who were in the 2020 Bracket. This was a great opportunity for our newest team members to get acclimated to the pace of play and to further build chemistry with our returners! The 20s went on to claim the ship in the 2020 Division as repeat champions.

NXT 2021 played up a grad year but faced a familiar foe vs. Steps and came up just short of making the Championships a “NXT-apocalypse” - NXT 2021 vs. NXT 2020. Being the first recruiting tournament of the season, the squad allowed some nerves to get in the way of their performance but this crew will be back at it and better than ever this weekend.

NXT 2022 what a difference a year made for this squad! Coach Jessi had the crew playing some of the best lacrosse of their careers and this squad is Confident with a capital “C.” 2022s earned a decisive championship, demolishing their opponents by outscoring them 56-9 for the weekend!

NXT 2023 Volt faced tough competition in each game they played, facing off against many clubs top teams and going 2-2 for the weekend. The 23s started slow, but 2 games into the day they made some adjustments to their play, confidence grew, and they were on fire! From winning draws, transition goals and team defense, this team was clicking!

NXT 2023 Black was able to stand tall despite a light roster and faced a formidable opponent in HOCO, a team that they lost to in 2018. History would not repeat itself, as the 23s stood their ground and flexed their muscles to secure the win and keep their record unblemished for the weekend, winning the 2023 Bracket Championship!

NXT 2024 this was a great experience for the 24s, who went 1-1-1 for the pool play and showed tremendous improvement since the spring season. Their offense executed on several new plays incorporated the pick and roll and demonstrated that they are not to be counted out!  We have a strong feeling Coach Coley will have this crew continuing to improve

NXT 2025 started off strong in game 1 and then faced their toughest opponent in Hero’s Lacrosse Club and couldn’t quite regain their composure in time for game 3.  This talented crew did not get the results that they wanted, but we have no doubt there will be a promising summer ahead as we get back to work at practices this week.

NXT 2026 faced the strongest competition this season versus a nearly perfect Hero’s team, playing in the strongest bracket for their grad year. This proved to be a challenging weekend for our strong 26 squad, but it was a great experience to see the bar set so high by one of the top clubs in the country!

NXT 2027 although the squad didn’t have the results we wanted this past weekend, we had a 24-goal scoring output between the two days and allowed only 2 more than we scored.  This weekend showed us we have a lot we want to continue improving.

NXT 2028 had a jam-packed schedule playing up a grad year on both Saturday and Sunday but they fought hard until the very end despite their exhaustion. The 2028 squad saved their best game of the weekend in their final pool play match resulting in a 4-4 tie vs. a strong 2027 team!